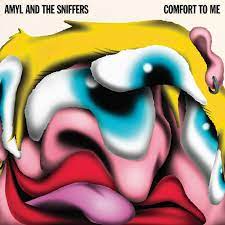 EDGE RADIO RECOMMENDS: AMYL AND THE SNIFFERS – ‘COMFORT TO ME’

Melbourne’s Amyl and The Sniffers have celebrated the release of their already-acclaimed second album Comfort To Me – out via the band’s own label B2B Records.

Comfort To Me, which was co-produced by the band and Dan Luscombe, is the follow-up to Amyl & the Sniffers’ critically acclaimed 2019 self-titled debut album, which won an ARIA Award for Best Rock Album and saw the band tour their anarchic and ridiculously fun live show internationally for the past two years.

Comfort To Me – mixed by Nick Launay (Nick Cave, IDLES, Yeah Yeah Yeahs) and mastered by Bernie Grundman (Prince, Michael Jackson, Dr. Dre, OutKast) – signals a major gear shift for the hell-raising Australian punks, who have emerged from the pandemic chrysalis louder, tighter and tougher than before.

With its lyrics largely written during the Australian Bushfire season, when The Sniffers were already wearing masks to protect themselves from smoke in the air, Comfort To Me came together in a 3-bedroom apartment where the four band members quarantined together during lockdown. The result is a less spontaneous and more darkly considered record that masterfully captures the essence of the band like never before. “This album is just us — raw self expression, defiant energy, unapologetic vulnerability,” explains frontwoman Amy Taylor. “It was written by four self-taught musicians who are all just trying to get by and have a good time.”

Renowned for their ball-tearing live show, Amyl and The Sniffers – rounded out by guitarist Dec Martens, bassist Gus Romer and drummer Bryce Wilson – will premiere a filmed performance of Comfort to Me on October 5, with the album played in full, in one take, on a slab of concrete in a suburban wasteland somewhere in Melbourne. Tickets for the livestream are available on the band’s webstore at amylandthesniffers.com.